The special connection we have with horses can be enjoyed by everyone. Here, three women share their experience of returning to riding after many years...

At 16 and after being around horses and ponies for as long as she can remember, Gemma called it a day. She had enjoyed some fantastic times on her ponies, Kizzy, Lucky, Pippa and Gemma – each taught her something along the way and qualifying and competing at Ponies (UK) Summer Championships was a real highlight.

“Fast-forward 15 years and a husband and two children later, and I got the horse bug again after going for a riding lesson with a friend from work,” says Gemma. “Before long, I took a lovely mare, Annie, on loan, as this was a good way of making sure that I could manage to work full-time, have children and still find time to care for a horse.

“Things went well and, in April 2013, I bought my own horse – a four-year-old Irish Sport Horse called Jay. Three years on, and he is still with me and we are enjoying the journey together. We keep him on a livery yard where people are so friendly and supportive – it's lovely to spend time with the horses, but it's just as nice to have a cuppa and biscuit with everyone. I love being able to unwind at the yard after work or after a busy weekend with the children – just me and my thoughts.

“The relationship you can forge with an animal is like no other. There's that heart-warming feeling when they see you coming on to the yard and they whinny – being around horses has that real feel-good factor.”

The first horse Leona rode was a huge, 18hh Shire that belonged to her grandmother’s neighbour when she was eight. She was smitten by the experience and knew that she wanted to continue to ride, perhaps even event. However, three years later, she developed Crohn's disease – and other health problems – and underwent major surgery, which called a halt to her plans. It would be 16 years before she would ride again.

“I have always been determined to start riding again, as my life has felt so empty without horses,” says Leona. “At the beginning of this year, I decided that, despite all my health issues, I would get back on a horse and compete.

“Chronic illness brought some very hard times and I subsequently developed depression and agoraphobia, an anxiety disorder. I tried many things to help improve my mental health, but nothing seemed to work until I started riding again and my depression and anxiety has begun to improve. I don't know why but, when I am around horses, I forget all about the stress, the anxiety, pain and fatigue. I feel completely relaxed – and relaxation is something I really struggle with.

“Riding makes me feel happy and one of the best bits is that you get to spend quality time with one of the most beautiful animals in the world.”

As a teenager, Nikki spent every spare moment riding or caring for horses. She wanted an equine-related career but like many people, her parents were not keen on this idea, so any plans she had ended when she left home for university and her best horse was retired through injury. Time and life moved on and, before she knew it, 20 years had passed.

“It's hard to believe I spent so long away from horses,” she says. “I went on to have two sons and suffered post-natal depression after each birth. I lost all confidence in myself and my career, and I gained weight and felt truly awful. My mum suggested that we should find a horse I could ride to get some fun back into my life. I think at the time she was desperate to see me smile again.

“The first horse we found, Clio, was a bit of a wild child and totally unsuitable for a rider who had children and been out of the saddle for so long. I thought I would just be able to jump back into the saddle and go eventing. It wasn’t like that at all. I knew what I wanted to achieve, but my body and my brain were out of sync after years of not riding. In fairness, I did have some success with Clio but I wondered if I should just forget the idea, but something drove me on. Clio was sold and I continued my search for the right horse.

“At that time, my marriage was failing and I was looking after two young children and trying to work to support myself. Out of the blue, I was told of a local horse that might suit me – a little coloured Cob that was based in a riding school. I went to see Wanda and I wouldn’t say that we clicked straight away. I was nervous after a year of riding an unsuitable horse and felt very wobbly. I found it frustrating that the things I used to do easily now felt hard. I used to worry that my confidence would never come back, but it did.

“We have struggled through some personal ups and downs over the past four years. I divorced and went through some very low times, which I still struggle with, but Wanda has been there and helped me to hold on to a bit of me – the bit that isn’t me as a mum or me professionally, although through one thing and another getting back into horses has led to a career in equine marketing and journalism.

“We have competed at affiliated dressage, showjumping and eventing with some great results, but it comes with some hard work, too. When the mornings are dark and cold, it’s windy and raining, I sometimes think how different life would be if I took up an ‘indoor’ hobby. But there would still be this part of me wanting to be outside with my horse.

”Having my own horse has given me a focus in life. Apart from raising my family. I have new friends and my children – I now have three, aged two, six and eight – all ride, too, so it's great spending time together.

“Being on the back of a horse gives you a very different perspective on the world – it slows things down, gets you closer to nature and allows you to appreciate the seasonal changes. The children also learn responsibility and how to care for animals and their environment. My youngest son has cerebral palsy, so being around horses is an important part of his life, as it helps with his mobility and muscle development.”

Gemma and Jay love being in the ribbons 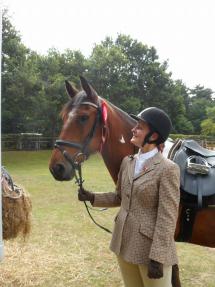 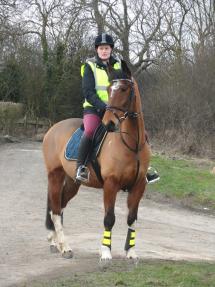 Out riding with Jay, Gemma enjoys time alone with her thoughts

Leona loves the feeling of relaxation that horse riding brings 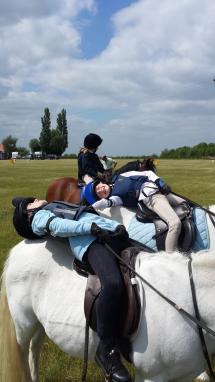 Riding means having fun as a family

Nikki enjoys a new lease of life with the wonderful Wanda 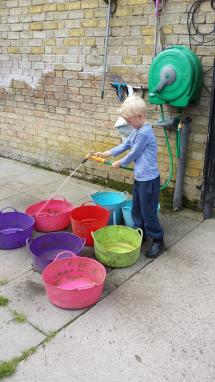