Everyone who takes up the challenge to #GetHorsey on our Take up the Reins Tour of Great Britain is presented with a free goody bag including a £10 Equestrian Taster Experience voucher towards a riding session at their local participating riding school.

We met lots of youngsters when the Take up the Reins team stopped off with BETA’s mechanical horse RoboCob, the mechanical Horse at the Trafford Centre, Manchester, and we were thrilled to hear that two-and-a-half-year-old Anya Kijowski, from Urmston, Manchester, has already taken her voucher along to the Carrington Riding Centre for her first #GetHorsey ride – and, what's more, she is taking weekly riding sessions!

Anya's mum, Nina, tells the Take up the Reins team about her daughter's #GetHorsey adventure to date...

“We are a really normal family, none of us are horsey and we live in a semi-detached house on the side of a road. Anya loves her toy ponies – she has a pink rocking horse and lots of My Little Ponies – and she really enjoyed her ride on RoboCob.

In fact, she enjoyed it so much, we decided to use the voucher we had been given and we went along to the Carrington Riding Centre, which is really local to us, and they exchanged it for a half-hour riding lesson.

“Anya was put on a small white/grey fluffy pony called Fluff Lightyear and she took part in a session with two other people. She was quite nervous, so was led by one of the trainers and I walked at the side to hold her hand.

“Since the first taster, Anya has been back and the Carrington Riding Centre has been brilliant in catering for her needs. They do a Pony Club session where Anya joins others for a 10- to 15-minute trek and then spends time grooming and stroking the ponies, which she really loves. It's all such a sociable experience for her and she will continue to do this on a regular basis.” 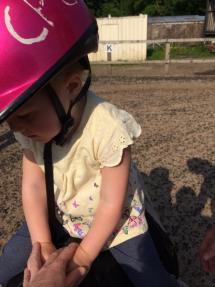